The convergence tolerances for timestepping (unsteady and pseudotimestepping) runs in Flood Modeller are defined by the variables htol (stage tolerance) and qtol (flow tolerance), which are specified either in the datafile or 1D Simulation file (ief) via the 1D simulation interface.

For stage tolerance, htol is always compared with dh, where dh is the difference in water levels between iterations.

The quantity compared with the flow tolerance qtol is determined as follows at each node:

HRATIO and QRATIO are not used to control iterations but provide diagnostic information to the user. They are generally defined as the maximum relative change in level or flow between time steps as follows:

Where i ranges from 1 to NNODES, H and Q refer to stage and flow respectively, NEW and OLD refer to the current and previous timesteps respectively and NNODES is the total number of nodes in the model.

If the value of HOLD or QOLD is very small (< 0.01) then the respective denominator is set to 0.01. The maximum HRATIO and QRATIO are output to the diagnostics file at each non-convergent timestep.

Note that, for situations where flows or levels can approach zero, and particularly for tidal models, the results from HRATIO and QRATIO can become misleading. For instance a QRATIO of 5000 will result when QOLD=0 and QNEW=50m3 /s - but the model may well have converged very accurately at this node. Similarly a HRATIO of 30 results when HOLD=0.001mAD and HNEW=0.30m (again the model may have converged well at this node). Users are thus advised to concentrate primarily on the 'MAX DH' and 'MAX DQ' values/locations, although HRATIO and QRATIO may provide additional useful information, e.g. in locating areas of rapidly changing level or flow.

In order to allow the user to monitor the progression of the 1D hydraulic calculations, Flood modeller displays convergence information graphically when a simulation is being carried out. The graphical display also shows the number of iterations required at each time step along with total model inflows and outflows. Periods during the simulation where the model has not converged are shown in a different colour. A typical output of a 1D model run is shown below: 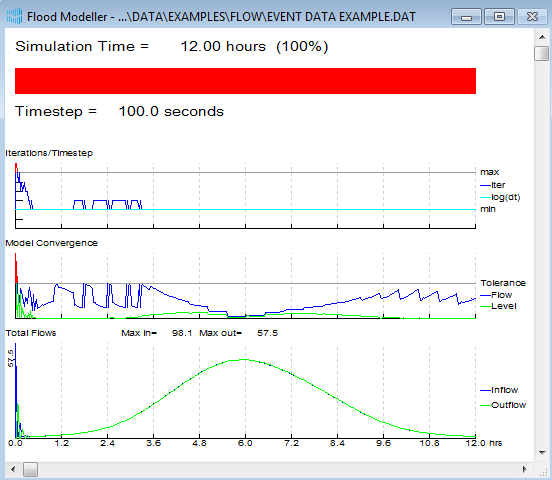 If either htol or qtol is exceeded at any node in the model, then the model solution is deemed not to be converging and a further iteration at the current timestep is performed (subject to the minimum and maximum number of iterations specified in the ief file). If convergence is not attained after the maximum number of timesteps, computations move on to the next time step and a warning message is written to the diagnostic output. You should ensure that an important part of the simulation has not been invalidated. If non-convergence continues to occur then the simulation should be aborted.

If too large a time step is used then necessary detail in the hydrograph may be missed or numerical instabilities may occur. The use of too small a time step may lead to excessive computation times. The optimum time step can be determined by carrying out trial runs with a range of time steps and selecting the largest time step at which the results do not change between runs. This time step may change as the model evolves and it is important to periodically confirm that the results are independent of time step size.

For the pseudo time stepping method the graphical display is not available. Convergence ratios are displayed in the Message Log after each pseudo time-step. These, and the 'MAX DQ' and 'MAX DH' values as described above, are also written to the diagnostics file. The user is therefore able to monitor the progress of the computations and after every five pseudo time steps decide whether to continue iterations with the same or a new time step.

Was this article helpful?
Thank you for your feedback! Our team will get back to you
How can we improve this article?
Your feedback
Comment
Comment (Optional)
Character limit : 500
Please enter your comment
Email (Optional)
Email

COMPANY
LEARNING
Support
GET IN TOUCH
© 2023 Jacobs. All Rights Reserved